This looks intense lol.... Nice work hope they like it!

i love it, daisy must be so happy how are you?? how are the new babies?? Tobi needs something like that.. he is big and the greatest tort on this planet I LOVE HIM

that looks AWESOME! nice work!! Daisy is one lucky tort!

re plants, what about ice plant? I have started putting that in parts of my yard that get the least amount of water and the most sun (basically where nothing else will grow) and it's been great! its really pretty too 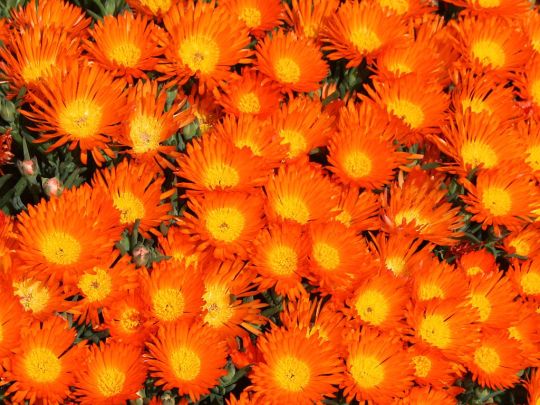 comes in tones of colors too. But I have no idea if the little guy can eat it. I would check that out fist

Update: I left the bottom of her new underground enclosure open so that she'd get the "benefit" of sleeping on real dirt. Daisy is three and a half years old and I got her at three months old. She has never tried to dig or burrow at all in any pen, indoors or out, ever. She lived in my prototype underground enclosure pen for nearly a year, and never dug at all.

For nearly two weeks she wouldn't even use her underground box on her own. I had to put her in the hole through the access portal and then block the entrance to keep her in it at night. And then one day, after around two weeks, I went to retrieve her from her usual spot at dusk and she wasn't there. A quick search around the pen and no Daisy... Could it be? Yes. I popped the lids and there she was looking up at me. From that day on she has put herself away every night.

Now apparently, 3' deep just isn't quite enough. She dug a small cavity for herself under the bottom of the rim of the box. I pulled her out and filled it back in. The next day, same thing. She wasn't going any deeper, but I was worried so I filled it in again and put a cinder block in that spot. Well she dug under the cinderblock and went back to her same spot in the corner of the back of the underground box. I pulled the cinderblock out and just let her have her spot since she wasn't going any deeper. I checked it everyday for a few days, and she wasn't going any further. She seemed to just want to be snuggled in a bit. So I left her and her little cubby hole alone. I let a week go by and when I checked again, there was a huge pile of dirt in the middle of the floor and a giant hole going down into the ground. She was above ground roaming around at the time so I jumped down into the underground box to see just how deep it was. Now, mind you, we are talking about a single, little, 4 pound, 9" tortoise here... It was soooo deep I couldn't see the end! I reached my arm in there up to my shoulder and couldn't touch the back. I climbed out and went and got a flashlight, so I could see just how far she had tunneled in just a few days. I could only see around 3' as it was curving to the left. I began shoving dirt in there to fill it up, and it took a lot of arm loads of dirt before it filled up enough for me to start packing it in there and feel the back. I would estimate 4 1/2 to 5'.

I have no idea how far she would have gone. I have no idea what the temps would be, that far down and away from the heat source. It had to be around 4-5 feet underground if you count down from the surface. The floor of her underground bunker is at three feet deep and she had dug another foot or two downward. I considered just letting her do it her way, but the fear of what could go wrong (collapse, too cold, inaccessible, etc...) made me decide to not let it go on. Daisy now has hard wood floors in her temperature controlled underground condo. It was not easy retrofitting a floor in four pieces into a hole in the ground, but the operation was a success. I left some gaps between the four plywood pieces that make up her new floor so that the humidity and "earthy" air can still circulate around in there. The gaps are only 1/2 -1" wide, so not enough space for her to dig anymore. I put some cypress mulch and coco chips down there for her to "burrow" into at night and feel more comfortable.

So the question was asked, "If you give a sulcata a manmade, underground, temperature controlled shelter and a great big pen, will they still dig?" The answer is: Yes. At least some of the time, they will.

I've been thinking about constructing something like this for my redfoots.

They just wanna dig Tom and a cinder block ain't stopping them. I would have done the same thing, it's one thing if you are able to get in there and get them out if something happens. Better to be safe than sorry...

Our days have been at or near 100 and the nights have been down in the 50's. Her underground box has a wireless temp probe mounted to the wall and it records the high and lows over a 24 hour period as well as displaying the current temp and humidity. The temps never get below 78 or above 80. It changes no more than 2 degrees in a 24 hour period. My tegu enclosure does the exact same thing. The heat is not on in either enclosure.

I'll do a thread soon, but I semi-buried my monitor lizards enclosure and that one is working very well too. It fluctuates around 10 degrees between a 104 degree day with the sun beating down on the top and a 55 degree night. It was between 87 and 77 on that day.

I too have been wondering about this sort of a system for non-burrowing species of tortoises. Specifically, my Gpp babies. Within another year or two, they will be big enough to live outside full time. I could simply build another big, heated box or shed, but the temps are SOOOOO stable underground and you use a fraction of the electricity trying to maintain warmth in the winter. I'll PM you the link to my monitor thread once I get it done and tell me what you think. It might be just the right compromise of above ground and way underground for a redfoot or a leopard.

Tom~Thanks so much for this thread! What a great example of showing others that want to build a large, long-lasting enclosure. So when are you coming to my house???? You know I need a couple more enclosures done

Christy, I wish I had the time to go around and do that sort of thing. That would be fun.

So Tom - now that you linked this thread in another one - how does Daisy like her enclosure? Does she still use it on her own??

SulcataSquirt said:
So Tom - now that you linked this thread in another one - how does Daisy like her enclosure? Does she still use it on her own??
Click to expand...

She was using it perfectly. The problem was she decided not to tolerate the presence of any other tortoises in "her" territory. I moved her to the adults pen and I moved my four hets and Tuck and Trey into Daisy's pen. Its funny, the six of them have been in it longer than Daisy was, but we still refer to it as "Daisy's" pen. Daisy has now learned to go into the night house with all the adults, but only 2 of the 6 yearlings will put themselves away underground. Every night I still have to pop the top and put them down the hole. Thankfully, they stay down there once I put them down there, but I look forward to the day when they figure it out and go in at night on their own.
B

Tom said:
Not in the least. My adults don't do it and at her size, she CAN'T do it.
Click to expand...

Fascinating project! You've put a lot of thought into this.

I think the wood is a better choice than concrete because it does provide somewhat of a thermal break.

Have you measured your underground temperatures over the year?

I have, and I've noticed a flywheel effect that benefits the tortoises.

I finished setting it all up in June, just as it started getting really hot every day here. The temps hovered between 75-80 all summer long with no electricity at all. We finally had a cold spell and some rain here a couple weeks ago and the heater kicked on for the first time. Right now its set at 75, but we are still having days in the 80s- 90s. When it gets cooler in another month or so, I'll bump the thermostat up to 80 for the winter.

Over in my Tegu pen, which has the same set up but with no heat, the temps are 69-70 right now, but I expect it to drop into the fifties in December or January.

That is really cool!! I wish all tortoises could be taken care of like you take care of them Tom!!

Then and Now, Daisy

My New Enclosures by @MarkW84