I am so excited to share with you that Mila's first egg hatched last week! This was the first time she ever laid, and the egg was quite large, at 30g. 63 days incubating at 89 degrees F later, the egg pipped (which means the shell started to crack where baby was pushing through). 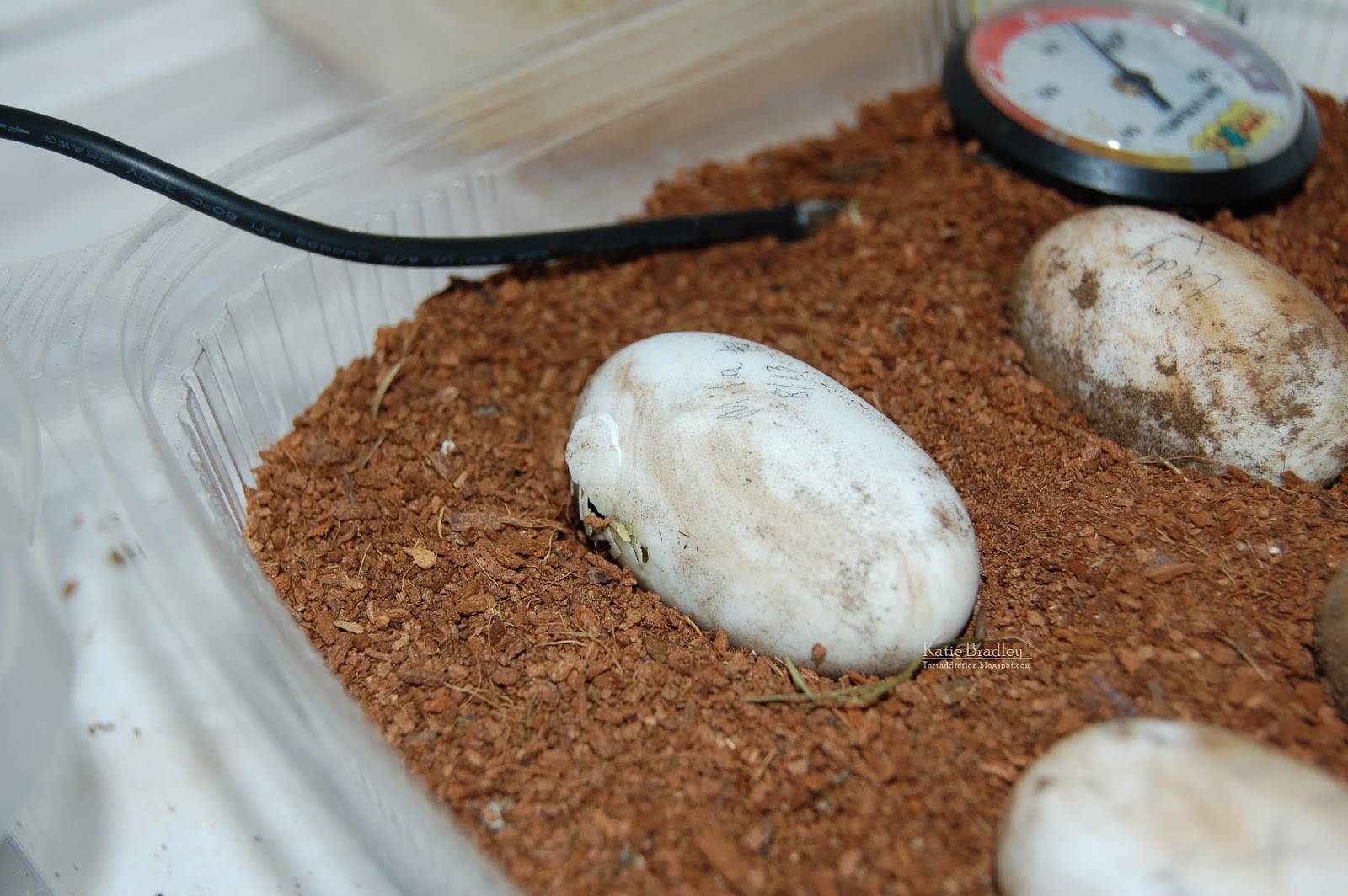 Tortoises, just like many other animals, hatch at their own pace, some faster, some more slowly. It is super important to let them come out on their own. If rushed (helped), a weakened, unmotivated baby may be the result, or the yolk sac may not be fully absorbed.
For this reason, as hard as it is, I just moved the pipping egg into a separate container in the incubator, with a moist paper towel, and then left it alone. 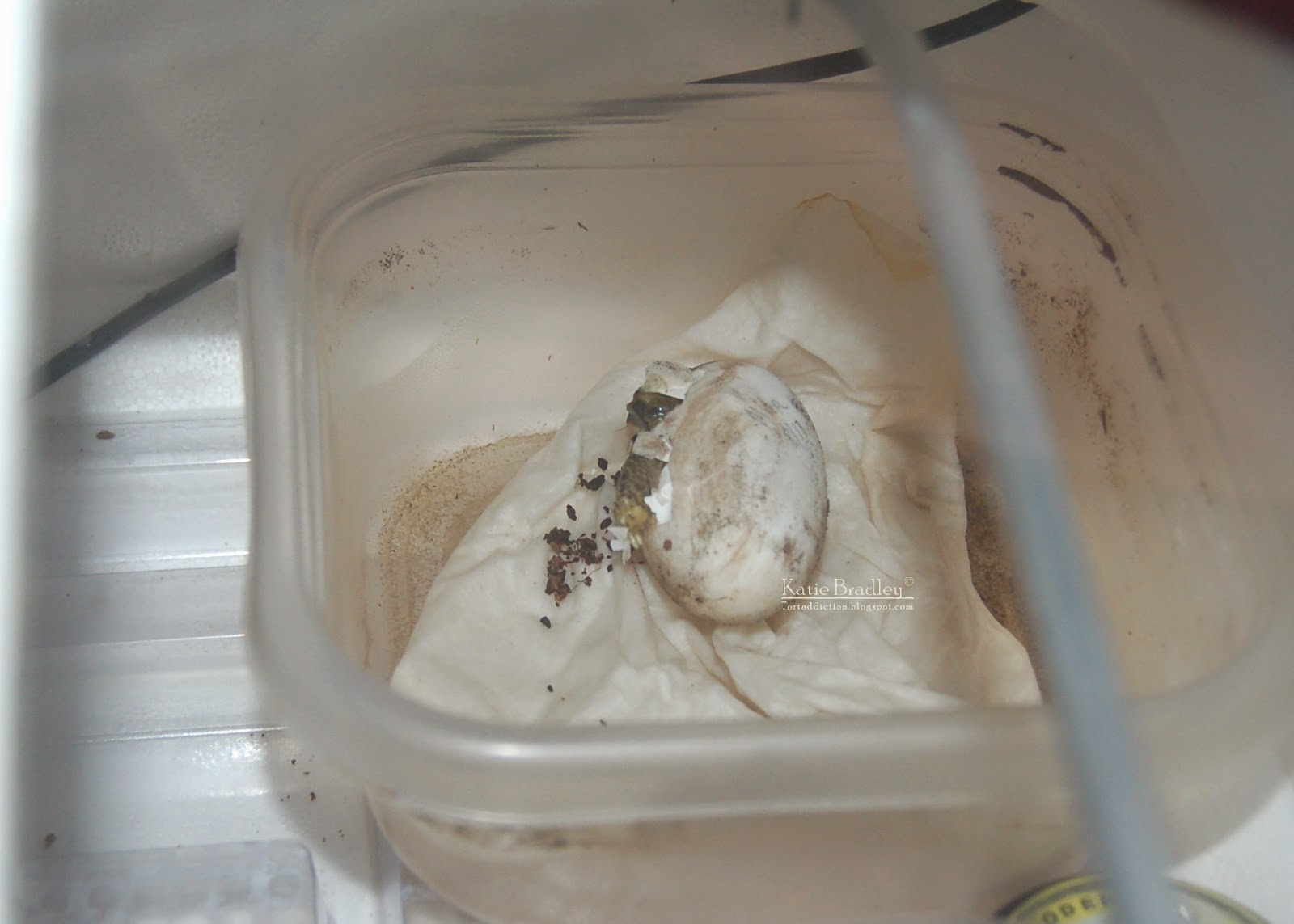 This baby took its time to hatch: one and a half days later, a tiny head and an arm were hanging out of the egg. It was responsive to light shining into the incubator, and was clearly breathing, so I continued to just leave the wee tyke alone. 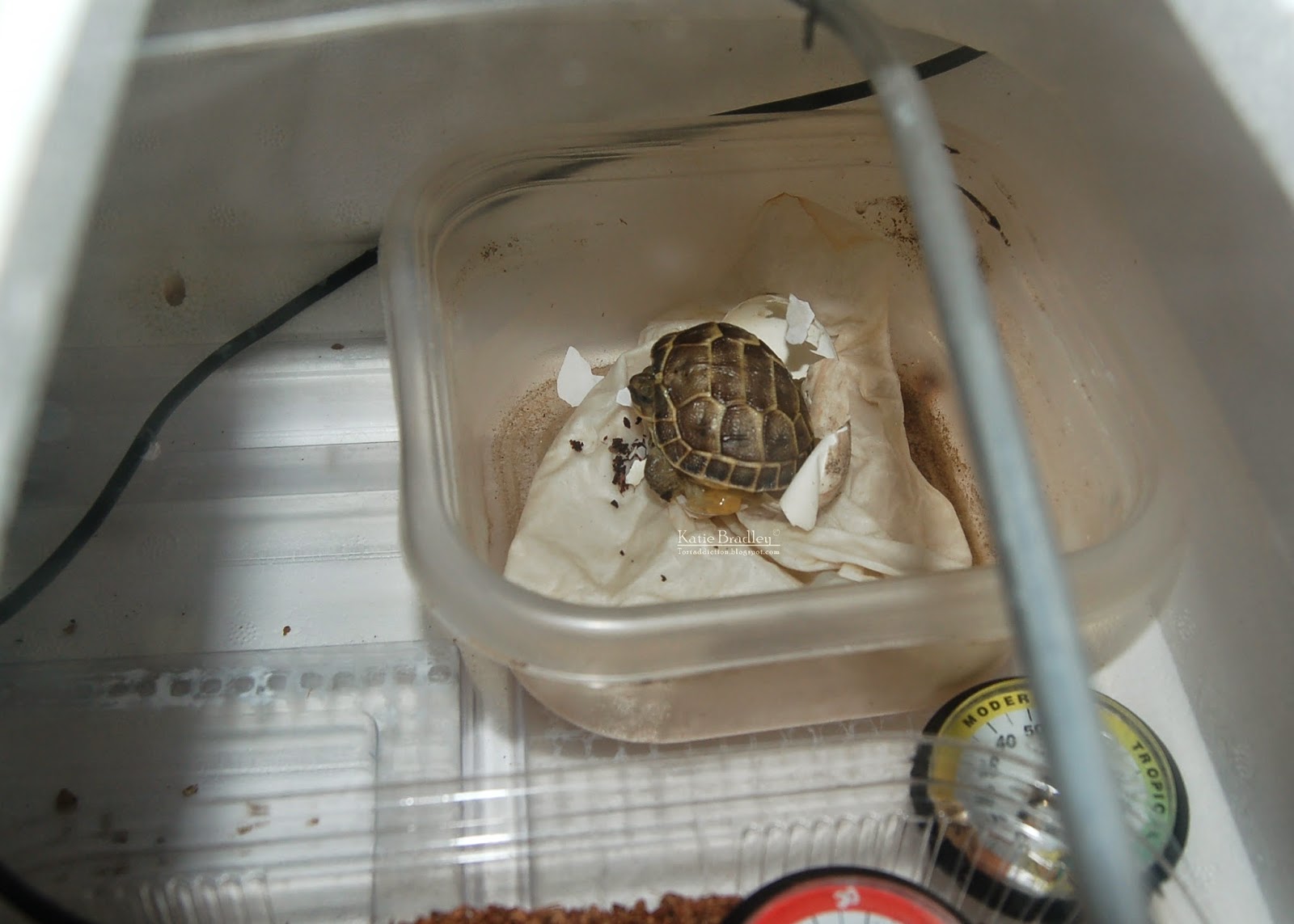 Finally, 48 hours after pipping, Mila's baby finished hatching and burst out of her shell! Looking at her through the window of the incubator, she looked very fat and more domed than Timmy's Spring hatchlings. 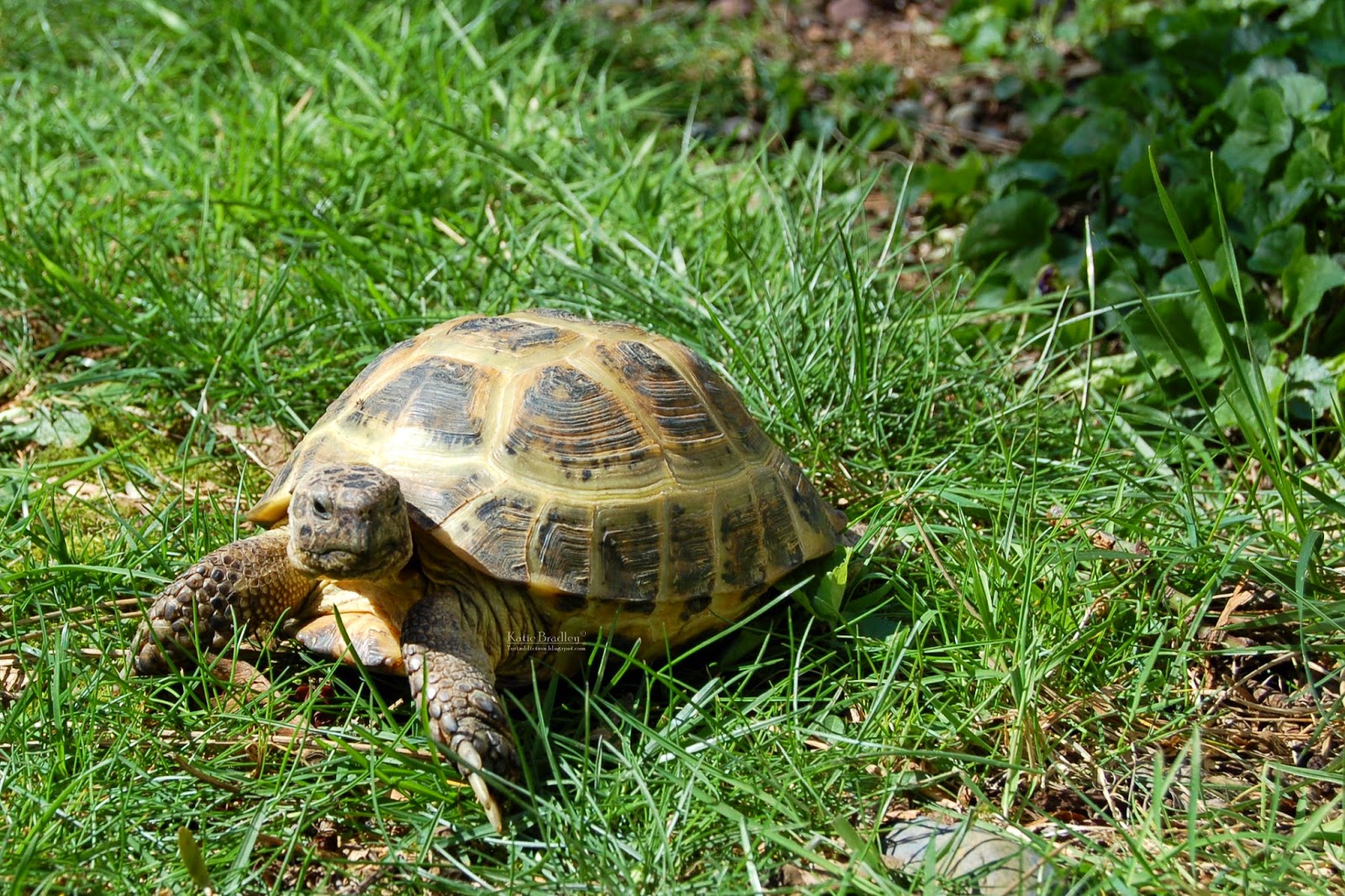 I posted a picture of Mila above - she has a pretty greenish shell that is unusually domed. When I got Mila's baby out of the incubator to give her a quick look-over, I could see that she resembled her mother a lot! 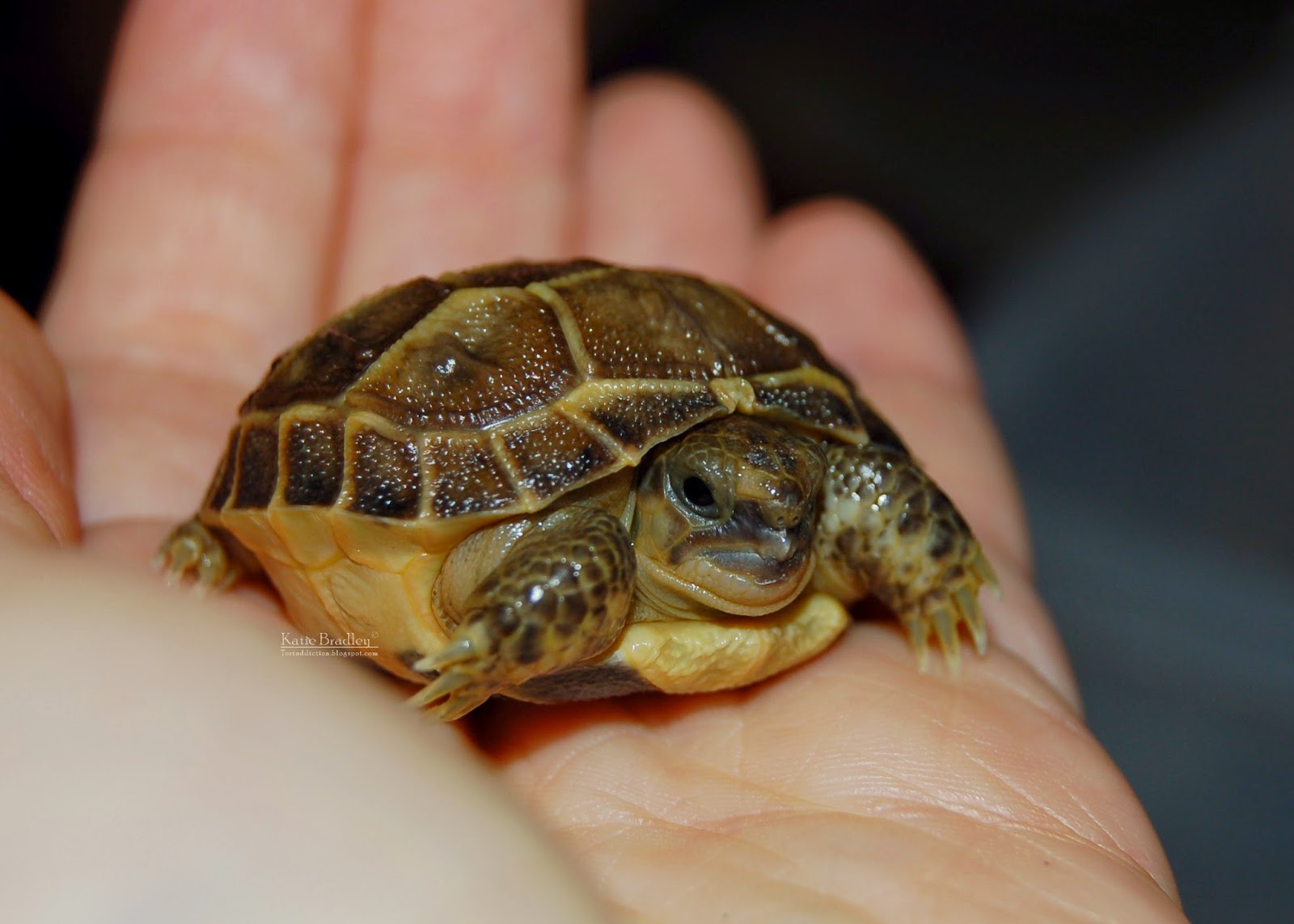 This wee girl surprised me with her size - at 20g she is quite large for a Russian tortoise hatchling. She has fat rolls on her legs, she has a double chin, her shell is very domed, and my favorite part: she has a handlebar mustache! 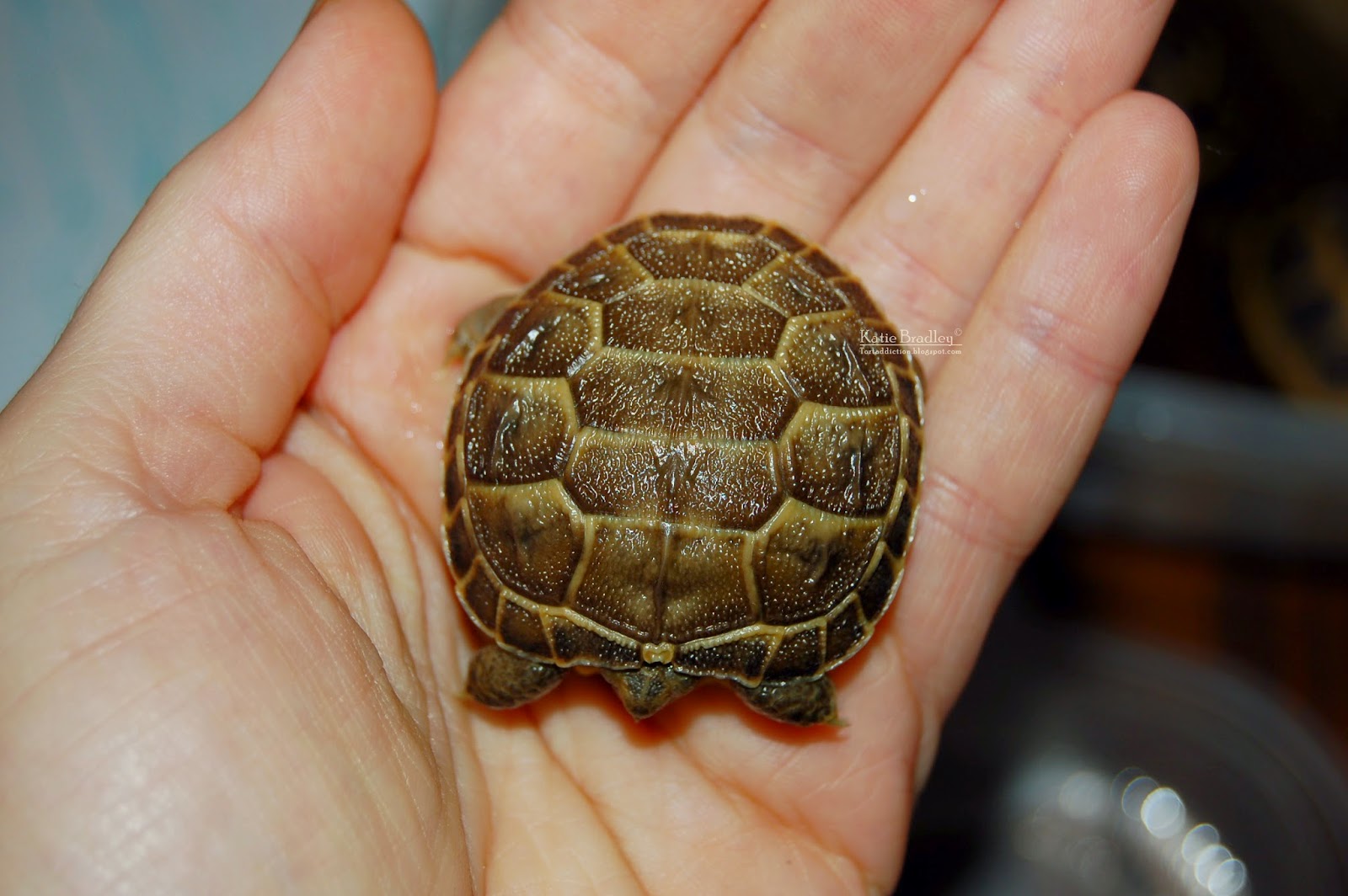 I am so proud that Mila is a Momma now. I am also happy (and a little surprised!) that Mila's huge, very elongated egg hatched out a perfect baby. 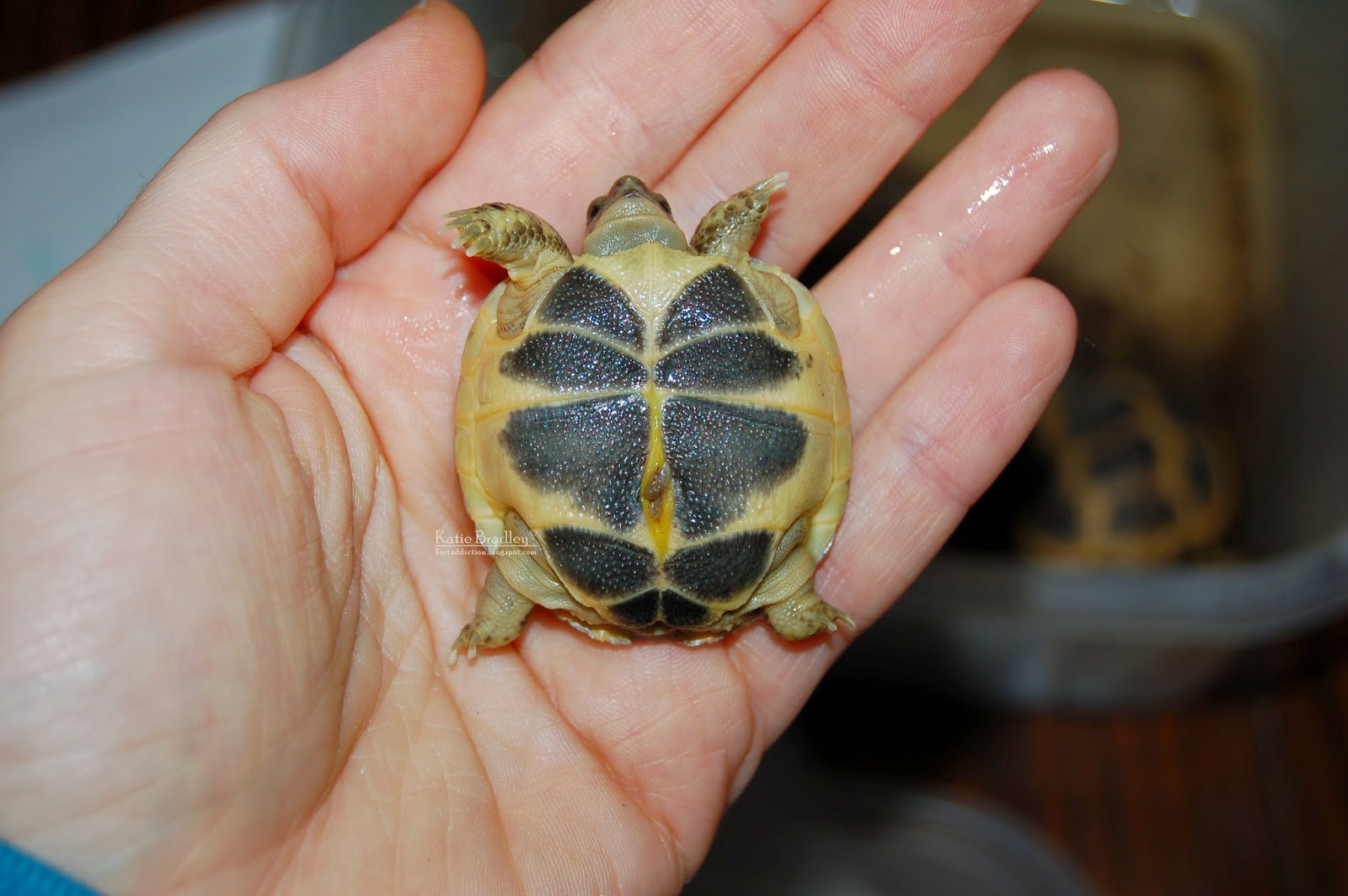 Baby's belly markings look like a clover leaf. Her yolk sac was mostly absorbed when she hatched - confirming that she knew what she was doing when she waited to come out of her egg. 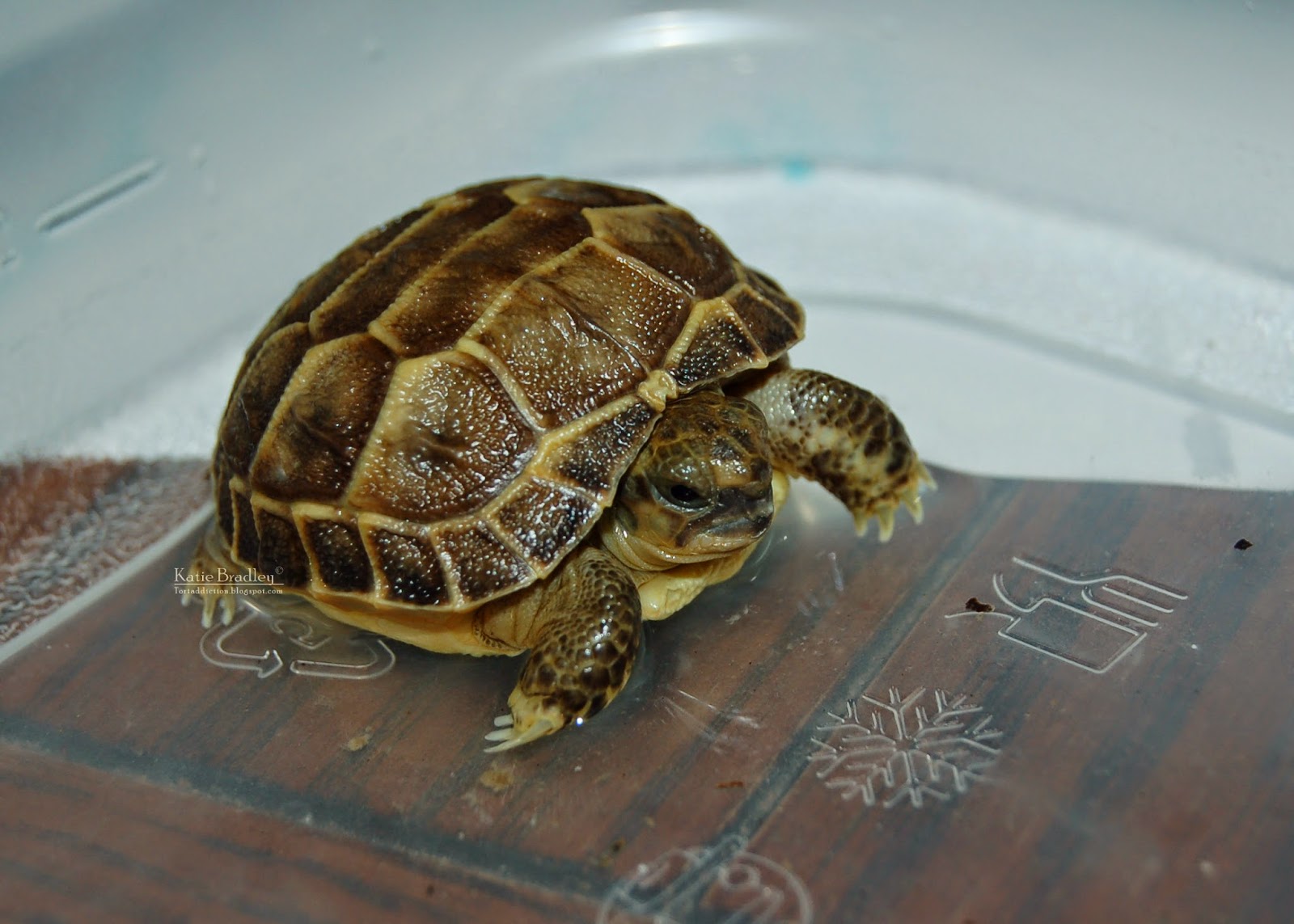 After 4-5 days in the incubator with daily soaks and mistings, I moved the baby into the baby enclosure. She is a little go-getter, very quick, and very curious. I see her scrambling all over the enclosure, burrowing down into the moist moss at night and several times throughout the day. She also takes teenie tiny bites out of tender greens. 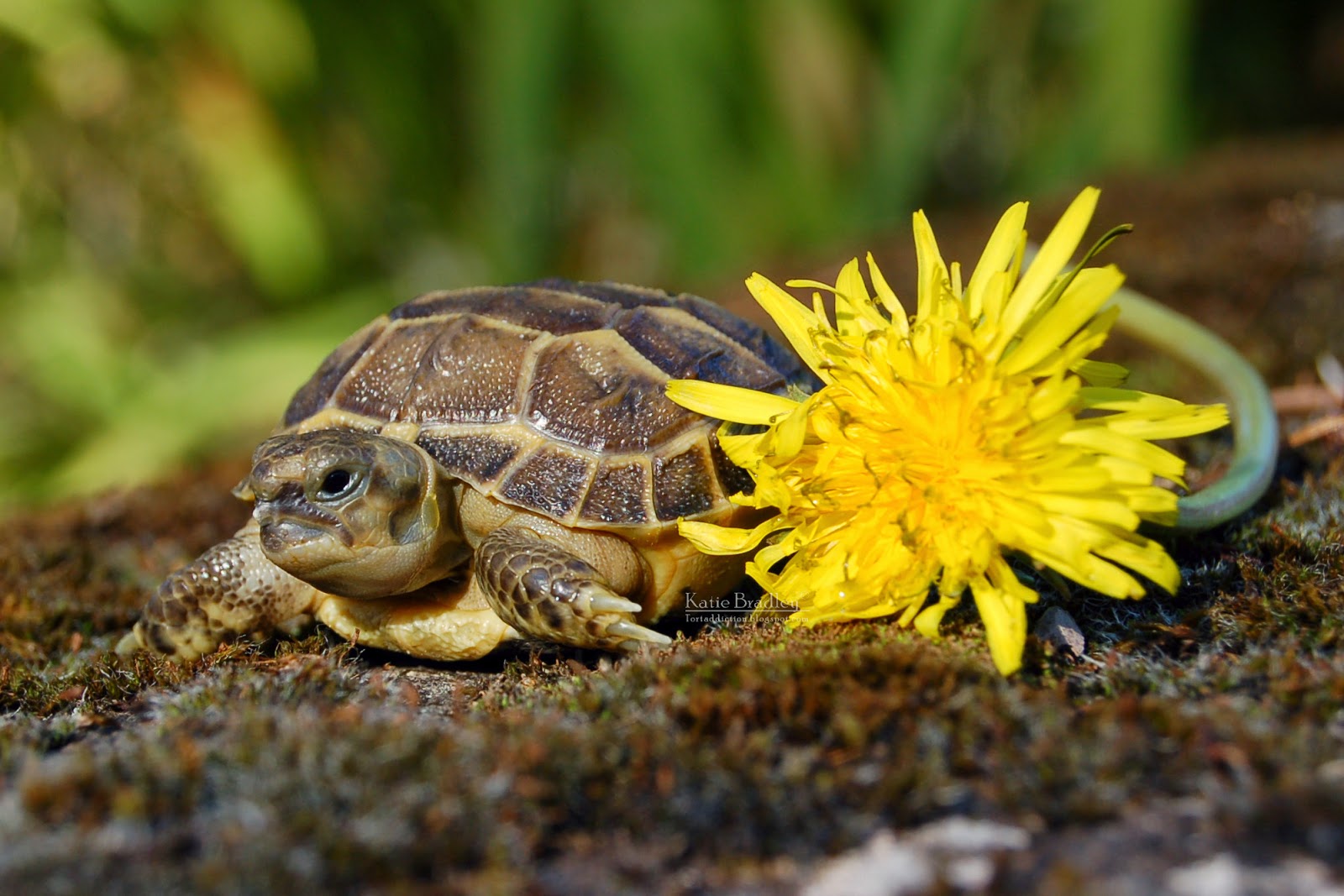 We got lucky last weekend with some amazing sunny weather, so I brought all the tortoises outside for some time in the natural sunlight. I took some pictures of Mila's baby next to a dandelion. Cute little green fatty! 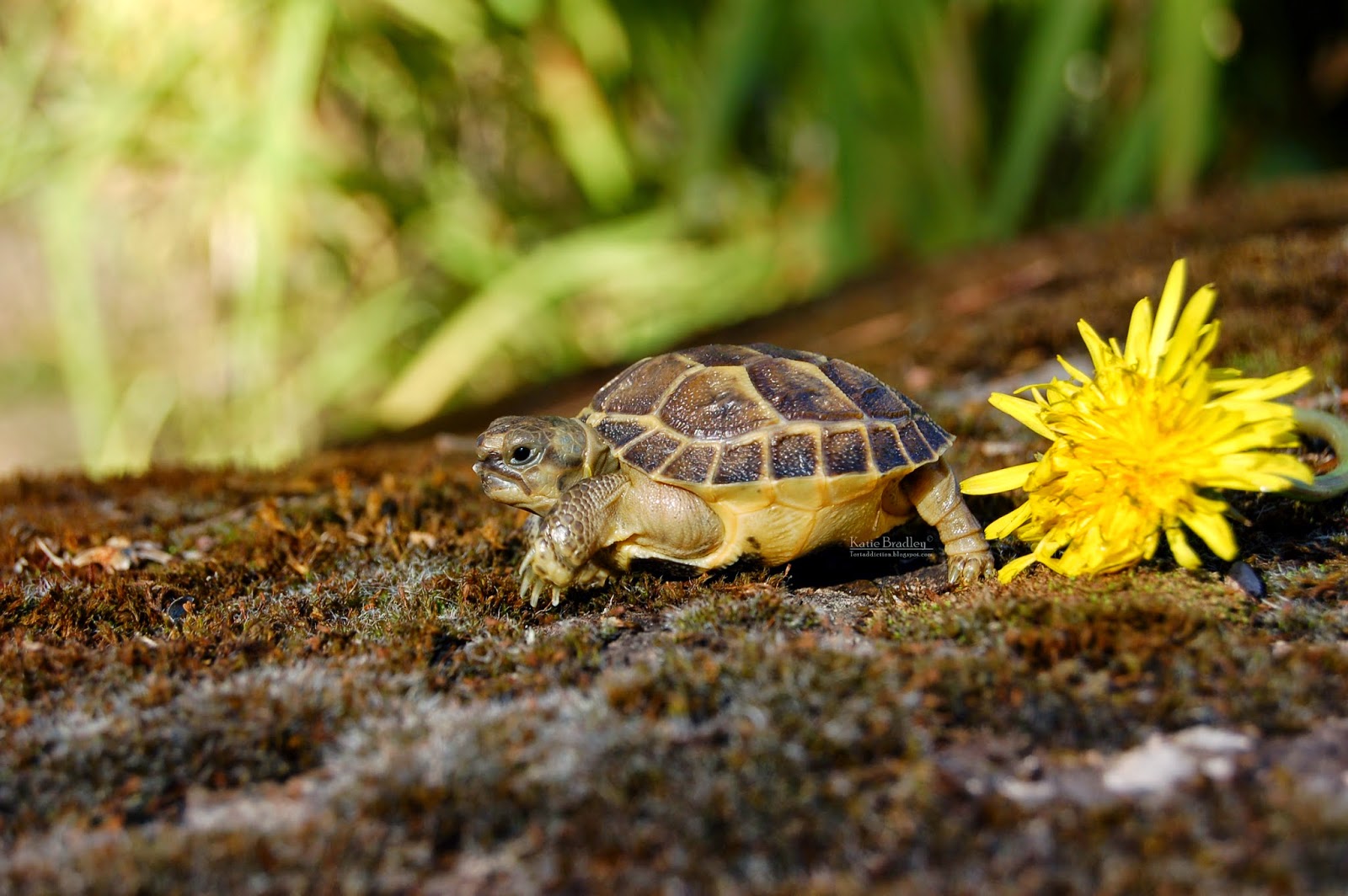 ...it was hard to get a good picture of her, because she was moving around so much. "Here I come, world!" she seemed to be thinking.

Too cute! Congrats! I love when they are so tiny and perfect.

i don't even understand how people can say torts are not cute. like really look at that little thing!!

She is the cutest chubby torty baby

Congrats!! She's so cute! Are you keeping all of the babies? Congrats to Mila too!

Congrats Katie. I love your posts and your pics are always first rate!

Mila is gorgeous too.

Awwww, what a cute lil piggy!

Yellow Turtle01 said:
Congrats!! She's so cute! Are you keeping all of the babies? Congrats to Mila too!
Click to expand...

Thank you! Haha, to answer your question, no, I'm not keeping the babies. I kept one of Timmy's Spring babies, because Timmy was my first, and that was her first clutch. But the whole purpose of letting my group breed is to make a dent in the demand for wild-caught tortoises. So I find excellent, qualified homes for the babies once they are established. This one is already spoken for - she was reserved the day she hatched.

Tom said:
Congrats Katie. I love your posts and your pics are always first rate!

Thank you, Tom! The secret to good pictures: Cute/healthy tortoises... good light... and a good camera! I'm just on the other end clicking the button.

Ps: This morning when I went over to the baby enclosure to get the little ones out for a soak, there was Mila's fat baby, happily sitting in the water dish, self soaking. I love how self-sufficient they are, given an appropriate set-up.

Sounds like Mila's fat baby (and all the other babies hatching at your place...) has won the tortoise lottery!

Wonderful thread, fabulous pictures and an ADORABLE baby!!!!
You must log in or register to reply here.

First hatchling of the year

C
When to soak new hatchling