I will start by saying I will abbreviate redfoot to RF, because otherwise spellcheck keeps changing it to REDCOAT...

I live in zone 10a on an island off the Gulf Coast of FL and I currently have my group of 4 juvenile (6" or so) RF/CH in a 10' x 4.5' enclosure (see photo). There is a large plastic upside-down tub inside for foul weather and in the "winter" months when the temps may dip into the high 40s one or two nights, I place a Stansfield electric heat mat inside that I believe is intended for pigs. Is the 10' x 4.5' dimension ok for now, as they are juveniles?

My enclosure is constructed of 2" pressure-treated lumber, and the 1/2" galvanized hardware mesh insures it's predator proof.

Predators, in this case, are raccoons.

We started out with 5 babies when we got them a few years back, and at first we kept them in a tupperware container atop a table on the front porch--which is up a flight of stairs--with a covered lid at night. One evening close to midnight I heard a loud THUMP outside just as I was dozing off. Sparing the gory details, I quickly discovered a raccoon had pushed the tupperware container off the table, which in turn knocked the lid off. The smallest and friendliest of the baby RFs evidently did not retract itself into its shell--you can guess what happened. For the next few months we kept the remaining 4 inside, until I built the enclosure pictured below.

My first question: Why do I find so many videos of RFs in tropical climates similar to mine where the pens have no tops on them? Are there no raccoons in these areas...? Is there a magic number size (i.e; 8") where the RF is sufficiently large enough that raccoons won't mess with them? If so, what happens when my RFs get to breeding age: are their eggs instantly raccoon food? My idea would be to let them eventually roam the confines of my side yard and lay/hatch the eggs au nautrel; is this not a good plan?

I have a prefect side/backyard area for them that's roughly 30' x 30' and already surrounded about 75% by railroad ties. Assuming they grow large enough to the point where they will not be terrorized by raccoons, I would like to place them there to wander and graze amongst bamboo and hibiscus. I also have Mexican Petunia (ruellia) and a plant called Devil's Backbone in that area, both of which are poisonous. Will they innately know not to eat those? The native box turtles that I aways see around somehow know to avoid those plants.

Also, the area in question is prone to partial flooding, both during the rainy season (now) as well as late October, when high tides of salt water temporarily envelop the parts of the terrain by as much as 3" in some spots. There are high spots that are never submerged in this area, so would this be ok?

To reiterate my main concerns: 1) Can adult RFs live in an open terrain in an area with raccoons at night; 2) Will the RFs know to avoid poisonous plants or will they need to be ripped out; and 3) Will they know to move to high spots during heavy rains/flooding?

Thank you for any/all tips. 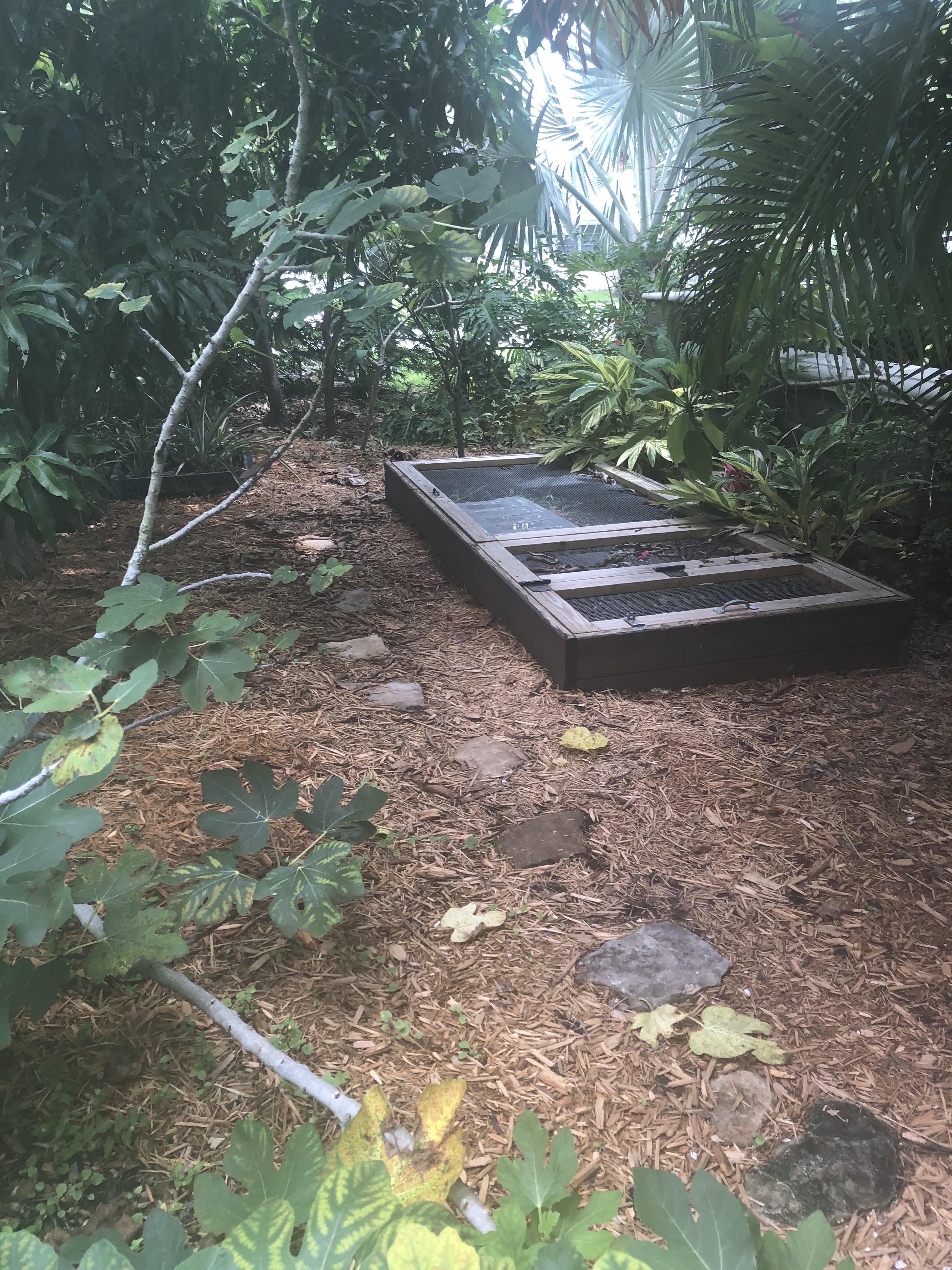 Can you set out live-traps for the raccoons? They're connivingly smart however...

If you do the live trap I recommend a little tuna and a piece of a reese's cup. Never misses
E

Hello and thanks for the replies. It isn't a question of 1 or 2 raccoons--there are quite a few in the area. The Florida Box Turtle is a fairly common sighting here, so how do they manage to escape the raccoons? There are tons of Kamp Kenan videos with the RFs roaming free on his property: are there simply no raccoons in his locale...? Would a heated hidey-house not get filled with raccoons (or snakes)?

Here is the outdoor area I would like to have them patrol, if not for the raccoon issue...

It is more a choice of easy food. That is why they love trash cans in the city- one or two stops and the belly is full.

You do have a problem. Unfortunately, until you can get rid of the raccoons your tortoise will not be able to free roam a large outdoor habitat. Too bad, really, because those pictures show a GREAT place for RF tortoises to live. Take a look at my friend Google and see if there are any raccoon repellents you can buy.
E

Raccoons are everywhere. I'm still having trouble believing that all RF tortoises kept in natural, non-covered habitats have zero raccoons in the area...
M

dogs are way more dangerous to turtles than raccoons …….. she could eat an adult turtle , shell and all , as easily as a dog biscuit , raccoon can't do that …... 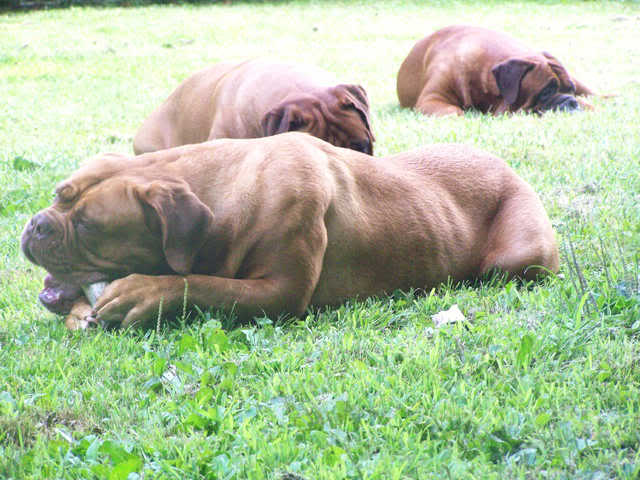 Those are some formidable beasts, for sure...

Gorgeous french mastiffs you got there
E

Unfortunately I'm not a dog man: I have an admittedly irrational phobia of dog poop.

You have a beautiful habitat for them!
What I would do is see if you can manage to fence in/mesh a part of the outdoor area, allowing the tortoises more space but that will ensure that the raccoons cannot possibly get to them. Even the fully grown ones will be at risk otherwise.
I live in Jamaica and we don't have raccoons but there are mongoose and they are just as bad or worse.
D

Evereigh Mann said:
Hello and thanks for the replies. It isn't a question of 1 or 2 raccoons--there are quite a few in the area. The Florida Box Turtle is a fairly common sighting here, so how do they manage to escape the raccoons? There are tons of Kamp Kenan videos with the RFs roaming free on his property: are there simply no raccoons in his locale...? Would a heated hidey-house not get filled with raccoons (or snakes)?

Here is the outdoor area I would like to have them patrol, if not for the raccoon issue...

Kamp kenan has a electrical fence surrounding his kamp.
E

Interesting, yet all very confusing. I just spoke with the gent from whom I purchased two of my tortoii; he lives on a 20-acre ranch in the middle of the state, and he has a herd of @30 Redfoots and @30 Yellowfoots. He advises that the area there is "infested" with raccoons, but yet he has never once seen evidence of a mauling/raccoon abduction of an adult tortoise. He puts the eggs into an incubator and sells the babies, so he has no advice/experience with babies & juveniles being exposed to raccoons.

Is this an anomaly, and I will essentially be playing Russian Roulette by leaving my adult Redfoots exposed when the time comes (again, they are only 3 or so yrs old now)?

Leaving tortoises outside, unprotected is ALWAYS a game of Russian Roulette to some degree. A tree limb may fall on them. A rat may decide to chew off a tortoise foot, or crawl inside the enclosure and die from rat poison consumed earlier, and then poison the tortoise after he innocently eats some of the rat's carcass. A kid might sneak inside and steal a tortoise. All we can do is try and mitigate as many of these possibilities as is feasible - which will vary from location to location, budget to budget, and so on.

Do what seems prudent under your circumstances and see what happens. Life was probably much more uncertain in the wild...

Trapping raccoons is easy.
The only bait I've found that only catches raccoons in the suburbs WITHOUT ever catching a cat, opossum or anything else is an apple cut in half.
Unfortunately then comes the problem.
Getting rid of the animal.
That will have to be your decision. But you must trap each and every one of them.
My battle with them was maybe 10 to 12 years ago. And included cutting down trees and replacing a portion of my roof. Long story.
I haven't seen a single raccoon within miles since then.
They are very smart, very strong and very capable of outsmarting most raccoon proof measures.
J

I feel your pain. We had a serious raccoon problem In Orlando a few years ago and nothing worked. Soon as one or even a family was trapped, others took over the territory. Fast forward to Sarasota - same issue plus feral cats. Then in came coyotes. Have not seen one cat in 3-4 years & no raccoons in more than 2 years. Many snowbirds here are scared to death. Personally, I welcome the relief! Coyotes are absolutely no trouble and avoid humans completely.
Stick to secure wire over the pen top. The raccoons will give up and look elsewhere for food.
BTW - about 75% or more of the raccoons in Florida either have or carry rabies. Most never show symptoms.
You must log in or register to reply here.

Update on my CB group