Pictures of different animals from work

Besides making sure that evil humans go to jail the best part of my job is doing calls for wildlife. I try to get pictures of most all of the wildlife as long as I have my camera handy.
All of the animals in these pictures were safely released/ rehabbed by licensed professionals.
Eastern box and RES. I had to pose them.

Red Tail Hawk, about 4 weeks old or so.

Brown bat. I had him in a carrier in a towel and somehow he got out and stuck to the door of my truck. No idea how he did that without hurting himself.

The kestrel a week later and now look! I swear you can watch them grow. 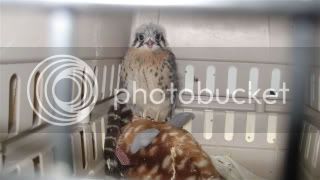 Wow, cool pics ! Thanks so much for sharing I love owls too, that little screech owl is so sweet ! That sure is a huge turtle!
I

Amazing pictures. I love pelicans and owls, they are so beautiful . Thank you so much for sharing When you get another pics, do not hesitate to post them

What a great assortment of critters! Each is beautiful...not sure who I'd want to take home with me. lol. I love birds of prey, they are just so awesome and Pelicans are just funny looking. I have a great appreciation of bats now that my kid studies them but have a soft spot for a reptile of any sort.
Thanks for sharing and keep them coming!

You have a great job! What a nice variety of wildlife you come into contact with. It must be very rewarding.

I want to have an owl in my yard. They are
just awesome to see...thanks for sharing those pictures, very nice!

Wonderful, wonderful, pictures. Keep them coming. You are so lucky to be in contact with these animals ....and to get paid for it is a bonus.

Thanks everyone.
I will remember to keep up on the pictures.
It is amazing, on a fun day I can't believe I get paid to do this.

W
So you want to see the birds?

ABSTRACTS OF PRESENTATIONS FROM THE 2013 Box Turtle Conservation Workshop March

Humorous Take on the New York Turtle and Tortoise Society