Frankie Tortose Tails: Dr Super Sleuth and the Case of the Wobbly Frankie

Owners need the same super observation and deductive skills. Regretfully, my skills were slow to notice that something was wrong with Frankie. In the last few weeks I was slow noticing what was going on and wrongly deduced the situation. I mistook Frankie's lack of "getting around the yard" to mean "it's to hot to walk around the yard."

Frankie wasn't getting around the yard much and it was defiantly hot outside. Frankie would find a cool spot in the yard and stick there for most of the day. That I noticed.

The bigger clue that got me thinking something was wrong was Frankie wobbled when he walked. Still, I just watched.

It was cooler outside one evening so I took Frankie for a Big Walk. He walked, slowly, down four houses, sat on the neighbors lawn, and then sat to grazed eating only the the grass that was within "head reach"

The walk back to the house, took an soooo long and Frankie kept stopping to rest. I started adding up everything I'd seen in the last two weeks and came to one very sure result: Frankie was having mobility issues.

Frankie's local veterinarian was unable to do an x-ray saying his equipment was not appropriate for large tortoises. He suggested I find a horse veterinarian to have them do the xray on a portable machine.

The equine veterinarians I called would have this very long pause when I explained that I needed an xray of a 100 pound sulcata tortoise. Only one would consider doing the x-ray and it would be another week before they could see Frankie.

I had a sense of urgency that Frankie needed to be seen SOON, and I needed a very confident veterinarian could do the job.

So I drove four hours to Birmingham, AL to see the best turtle doctor in Alabama: Dr. Alvin Atlas.

Yes, I did. Just Frankie and me, in the car, for four hours.


At the vet's office, they sent staff to help me get Frankie out of the car and into the building. It took some time to get the limping Frankie inside. Just walking into the examination room was painful. Unlike his last visit to see Dr. Atlas, Frankie just sat there. 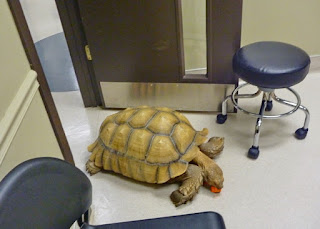 This is far enough. Not walking another step.

When Dr. Atlas came in to see Frankie all I told him was Frankie was having mobility problems. Dr. Atlas sat on his stool and he and Frankie just stared at each other.

Dr. Atlas said, "That is unusual."

"You mean Frankie just sitting there?"

We discussed that the last time Frankie was there he did endless laps around the examination room the whole time. Not this time.

Atlas and Frankie stared at each other again. After a minute or so, Atlas asked his technician to get Frankie's weight and ordered x-rays. Since Frankie was not in a mood to walk a pop up animal stretcher was brought. 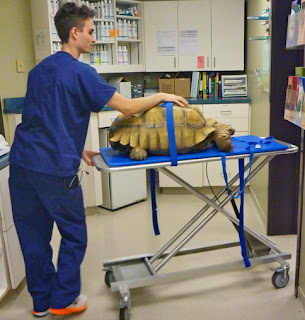 Frankie getting a ride.

Frankie got several xrays. This is his good foot. 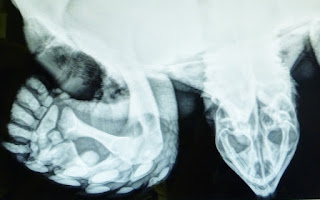 The xray of the other foot showed some oddities around the digits. Here is what his left foot should look like: 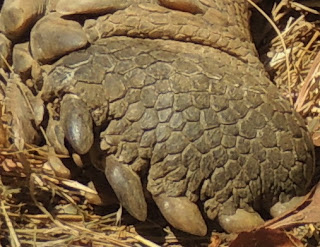 How the injured foot looked at the veterinarian's office. 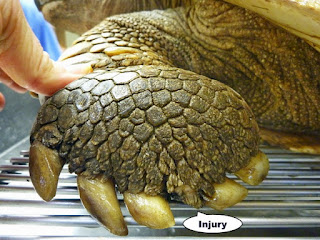 The digits are separated and scales torn.

Frankie had stepped on something that forced his third and forth digits apart and tore up the scales in between. Ouch!

I hadn't even noticed the injury at all. Dr. Atlas' keen observations discovered the exact spot where Frankie was hurt. 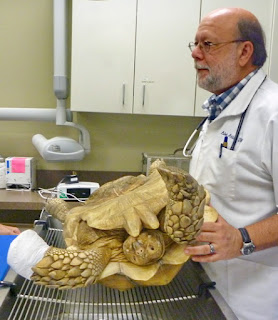 The undignified turtle on back pose.

Frankie's wound was cleaned and bandaged. Poor Frankie had to get into the tortoise on back position to get fixed up. Frankie hates being on his back!

All finished, Frankie was wheeled back to his room to await further instructions.

After we left we stopped by for a rest and gave Frankie a few minutes of grazing. 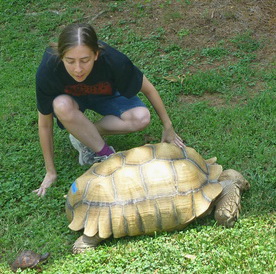 Back in the car and four hours later Frankie and I were home in Mobile.

About that nice clean bandage that took Dr. Atlas 20 minutes to put on, Frankie tore it off in the car. As ordered, I cleaned the wound and put on a new bandage....and then covered it in duct tape. That bandaged lasted 24 hours.

Frankie is home, recovering.....a very long recovery. Tortoises are slow to heal and having an injury on a foot is just more complicated. He is restricted to the back porch and the bathroom. He wants to walk but it is evident he is hurting.

I am nurse to a grumpy 100 pound sulcata tortoise. He wants food, NOW! He wants to walk, but can't get around easy. It's cold in the house and very hot outside so he can't decide where to hang out.

Really glad I bought that hot steam rug cleaner. And it does floors without rugs! Lucky me!

Frankie is ready for get well cards and well wishes, gifts of hay, carrots, and hibiscus flowers.

Will keep everyone updated on his recovery.

Poor Frankie. Hopefully he will heal fast enough to get out of pain and be able to do some gracing of his domain.

Good thoughts for a speedy recovery for Frankie!!

Poor Frankie. I hope for a speedy recovery. Sending you thoughts of patience to get him through this

Thank you for sharing this with us, hope Frankie heals quickly. Wish I could offer him a handful of carrots!

Ouchie.. Wonder what he stepped on to tear up his scales like that... Who knows..

Glad you are on the road to recovery! Get well soon Frankie

Wishing you a speedy tortoise recovery Frankie,
Love from Lola and me!

I hope he gets well very soon. Best wishes. He is a great looking sulcata

Poor, poor Frankie.
Tidgy and I wish him a very speedy recovery.
Little Tidgy had mobility problems in February and i remember how miserable it made her.
Thanks for sharing and hurrah for Doctor Atlas from the Atlas mountains !
You must log in or register to reply here.