Egg season has begun for our Russian tortoises!

Today Timmy girl decided it was time to lay the first clutch of eggs this year. I have suspected that she was gravid, since she was pacing a lot, eating tons, and had scarfed down 1.5 entire cuttlefish bones within a few days.
After 2 weeks of beautiful sunny weather, unfortunately it is cold and rainy again, so putting Timmy outdoors to lay her eggs was not an option. Thankfully, my marvelous Timmy girl is ok with laying eggs indoors into a deep bin filled with warm, soft, moist soil.
When my son observed Timmy digging with her back legs, I set up such a bin near the basking area, with a little ramp up to it, and she knew exactly what it was intended for. Within a few minutes, she started to dig her nest hole! 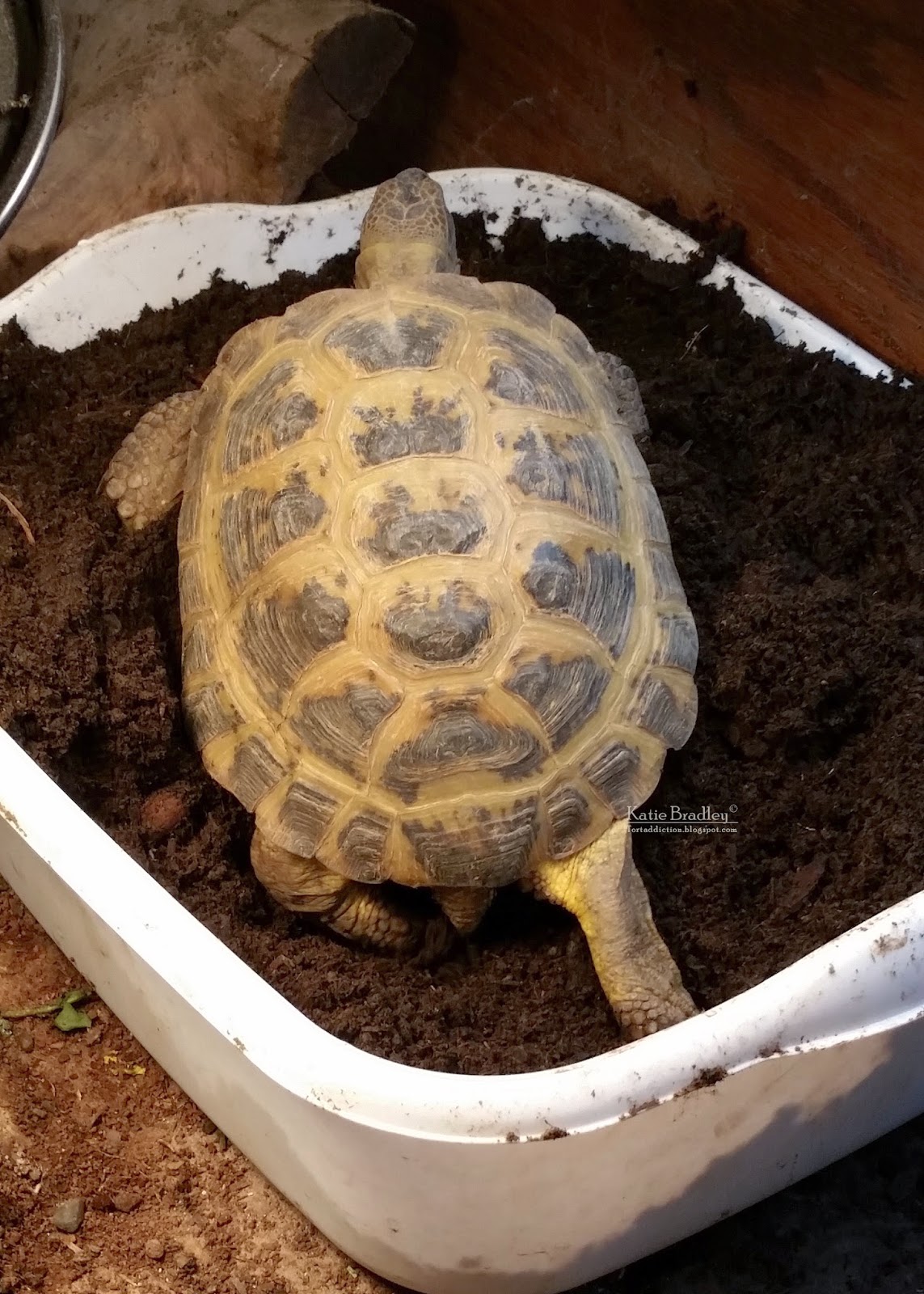 After about 1.5 hours of digging, Timmy started to drop her eggs. She caught each egg with one leg as it came out of her vent. I happened to catch it on my phone camera: 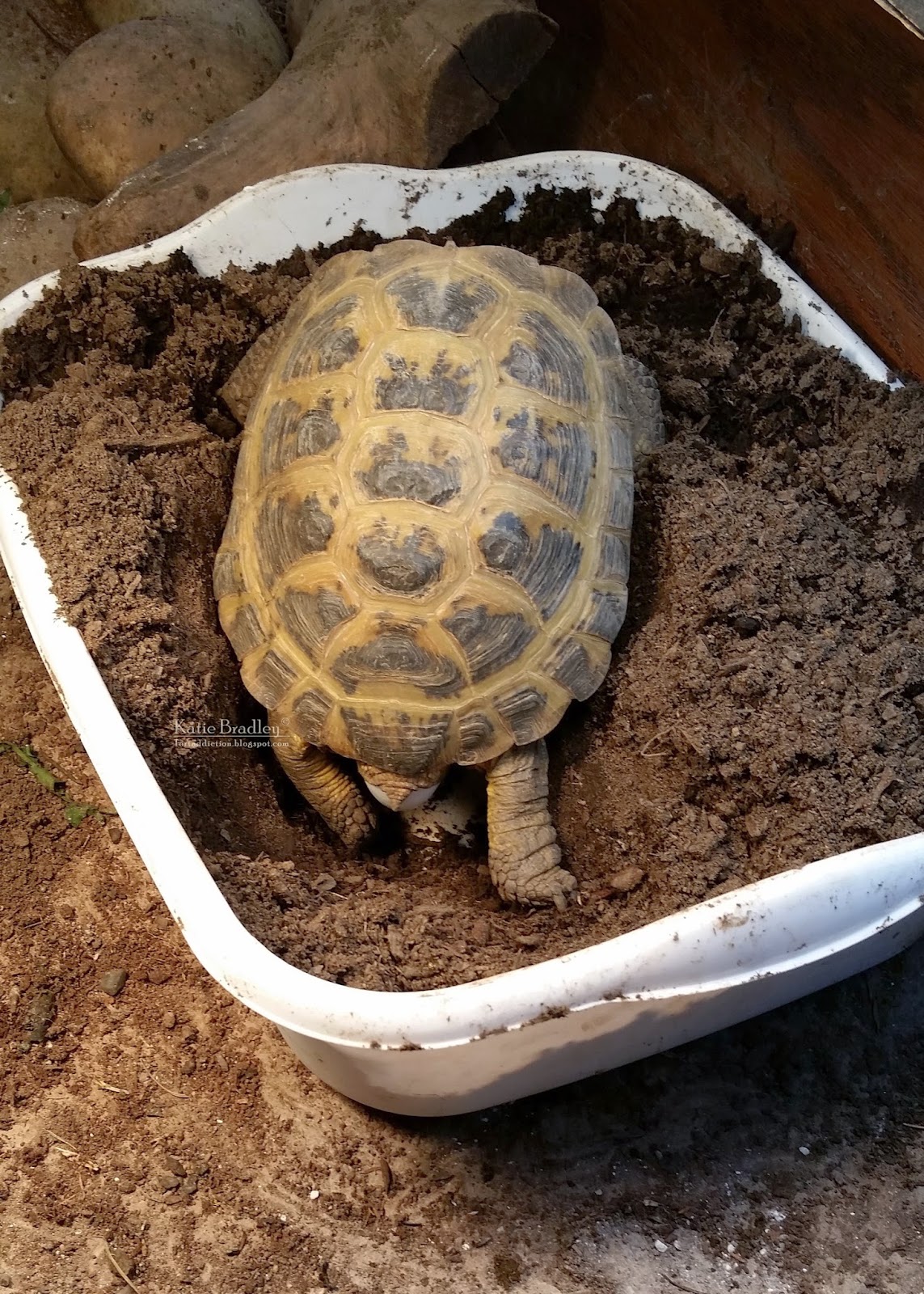 You can see the egg starting to come out of her tail. 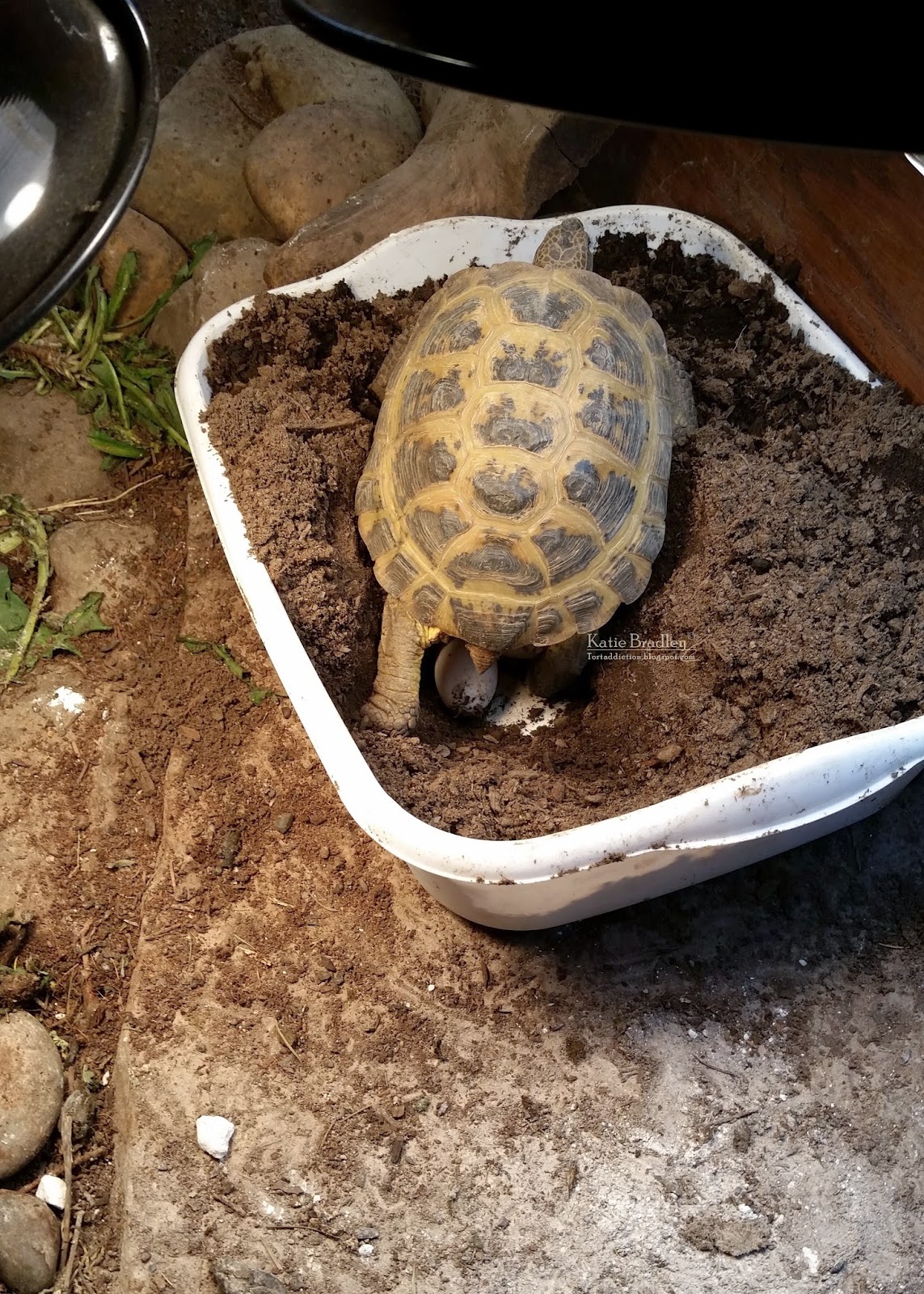 Once the egg was out, Timmy gently moved it into further the hole with her foot 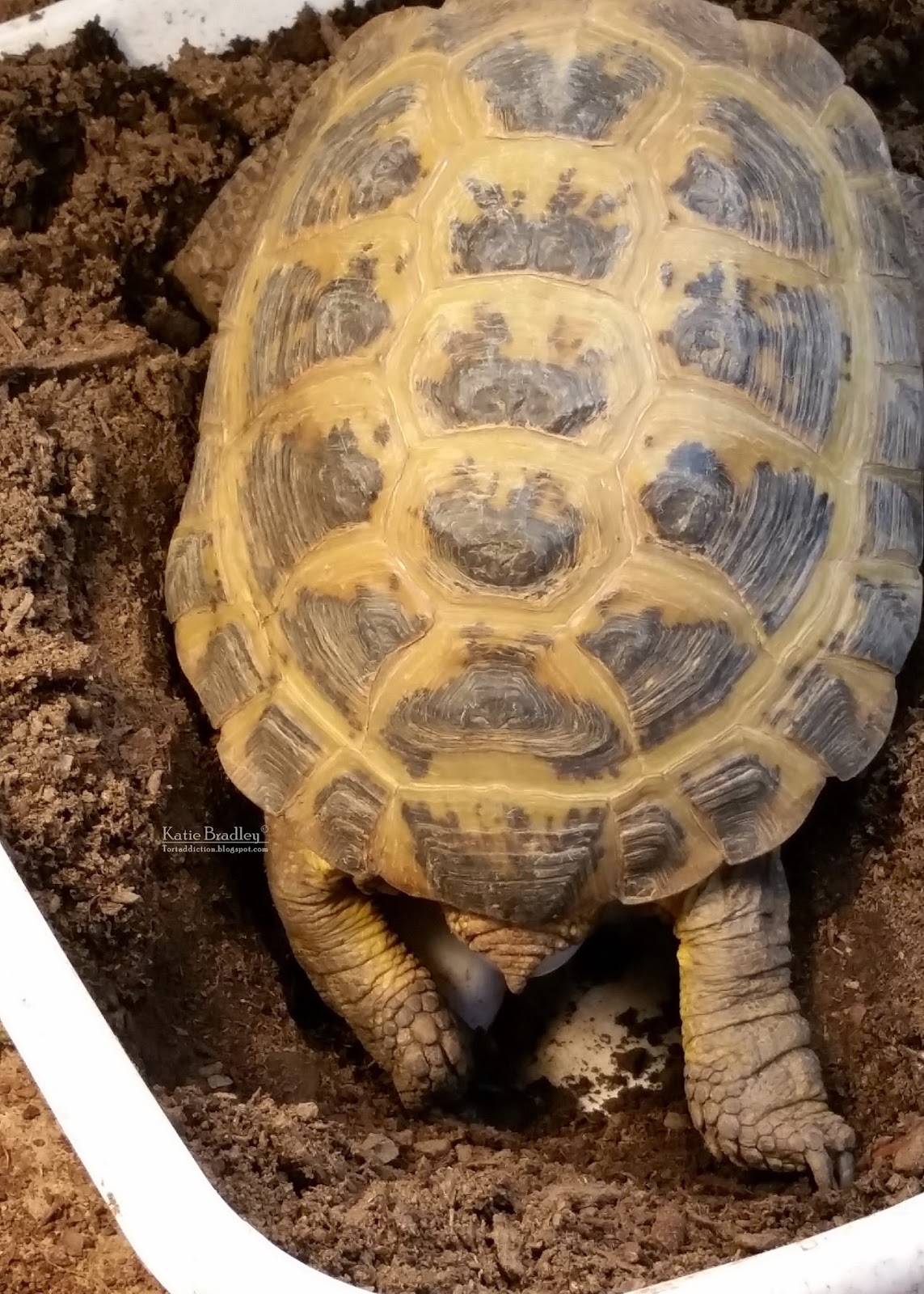 Next egg is on its way out 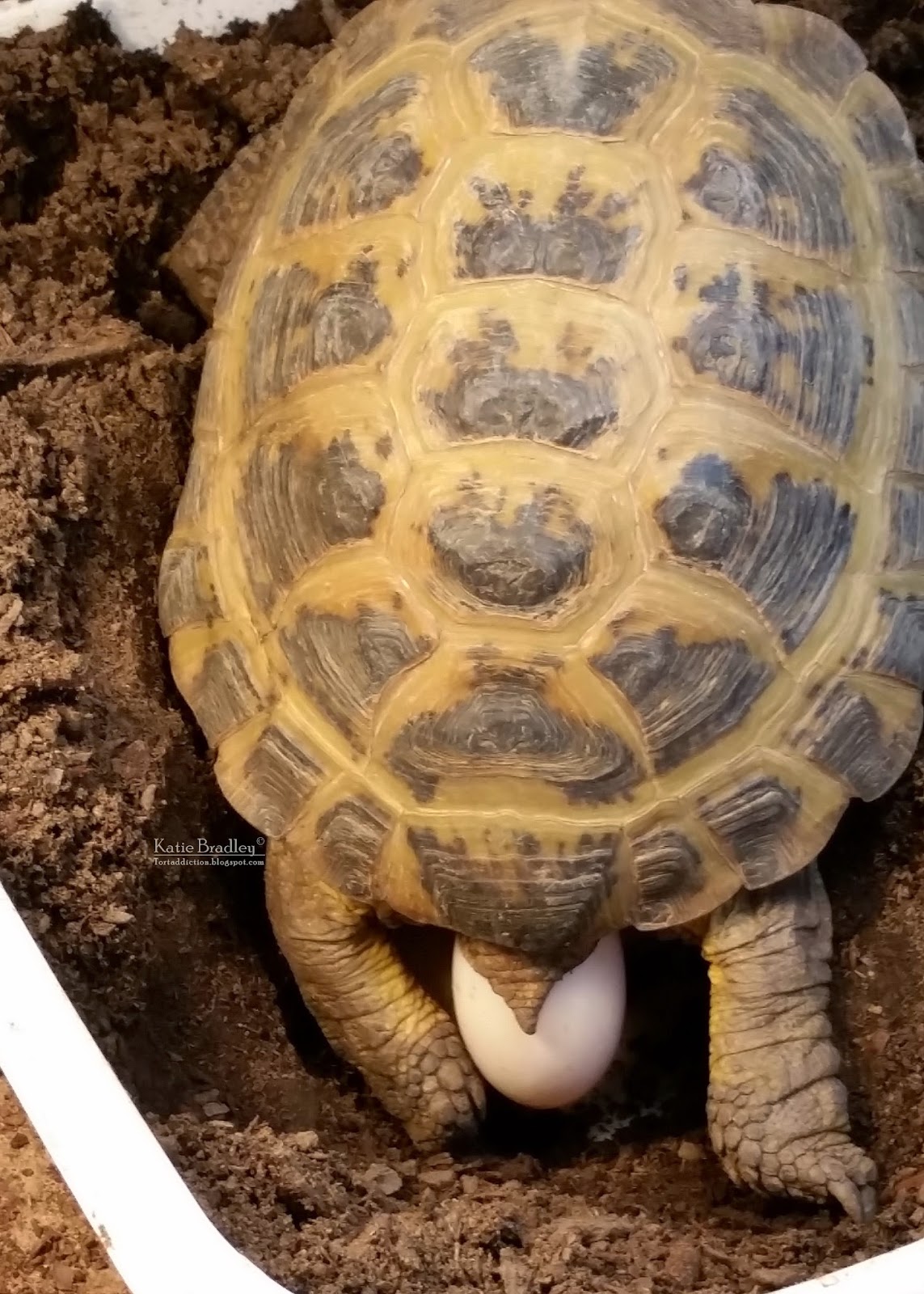 Timmy uses her foot to catch the egg, so it doesn't fall into the hole and break 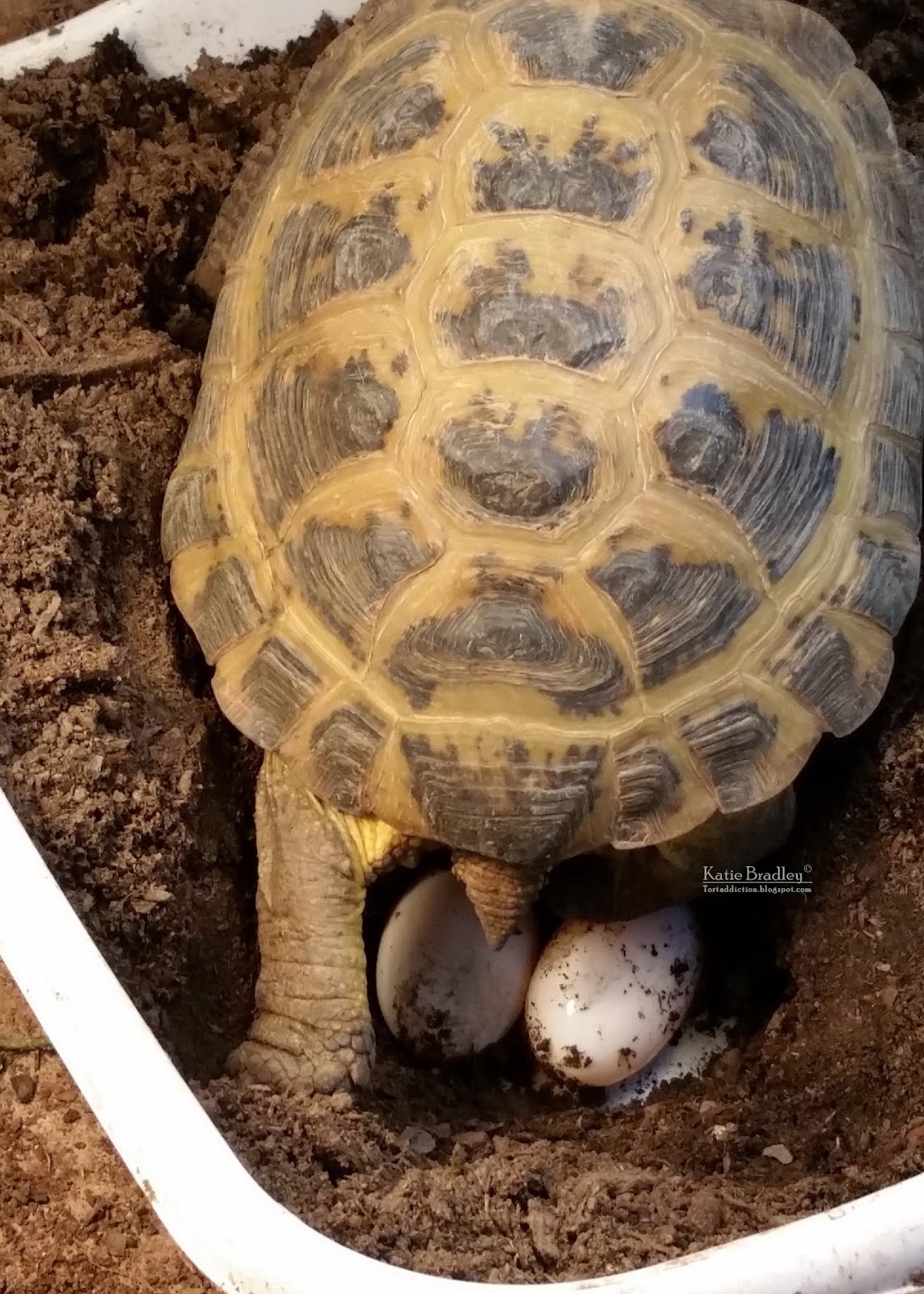 Third egg is out.

Within a few minutes of each other, Timmy laid 3 beautiful little eggs, weighing 20g, 22g, and 22g. These are a little bit smaller than last year's eggs, but still a very normal size. I will incubate them at 89 degrees F for the next 65-75 days. 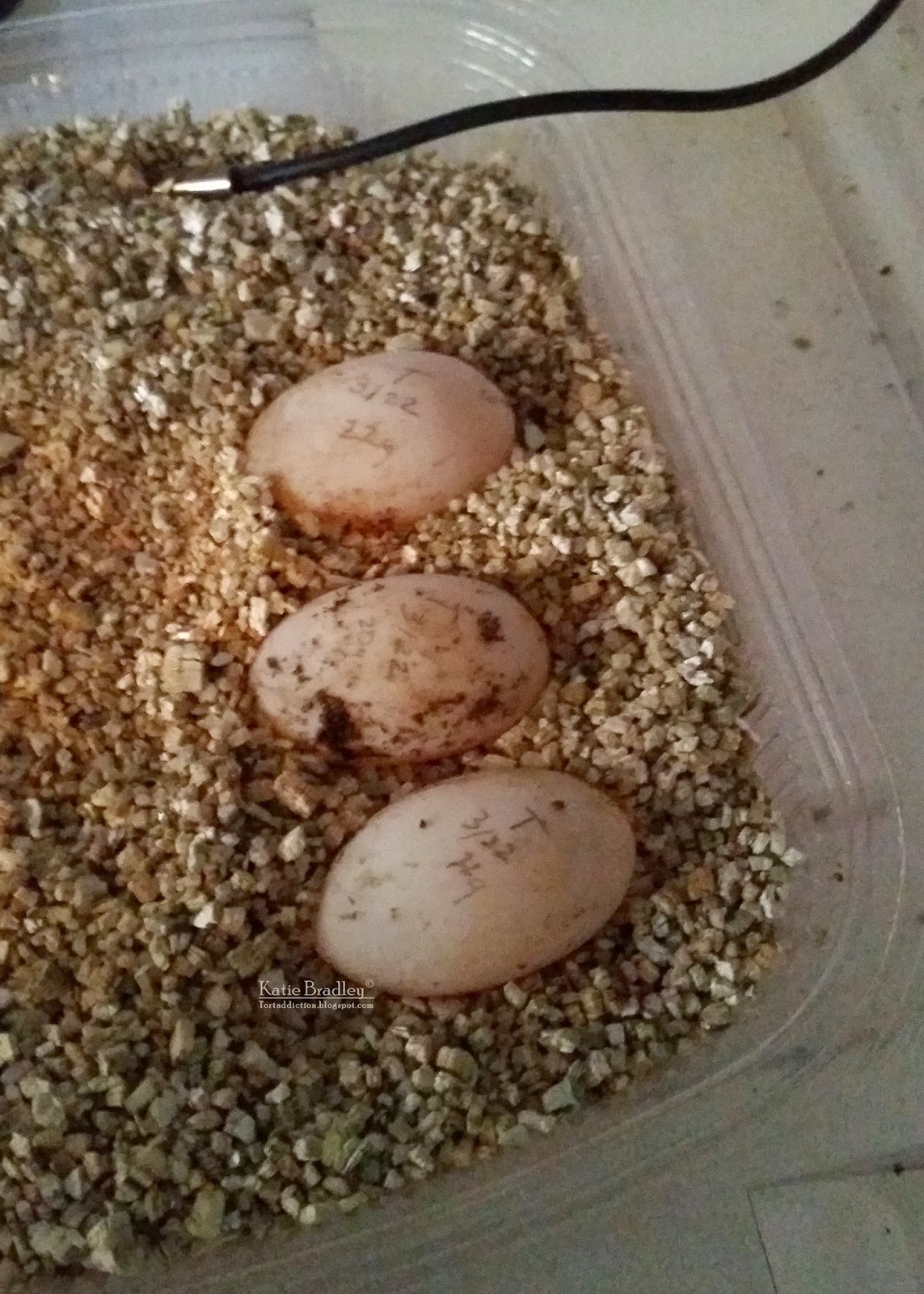 When nesting, tortoises go into sort of a trance, and they must be allowed to finish the whole process, from digging a hole, to laying the eggs, to covering up the hole. If they are interrupted (e.g. if they are removed after laying eggs, without being allowed to cover the hole), females have been known to be in a serious funk for many months. This has never happened here, because I make sure that the nesting female does not get interrupted. If I catch the tortoise in the act of laying, I carefully remove each egg from the hole as it is laid, and replace it with a round egg-sized rock. That way the eggs aren't in danger of being crushed. The female doesn't care, and happily covers up the rocks, pats the dirt to firm it down, and walks away.

After laying her eggs, Timmy's legs were super wobbly, but she headed down the ramp, basked for a little while, and then tucked into some fresh weeds I offered her. 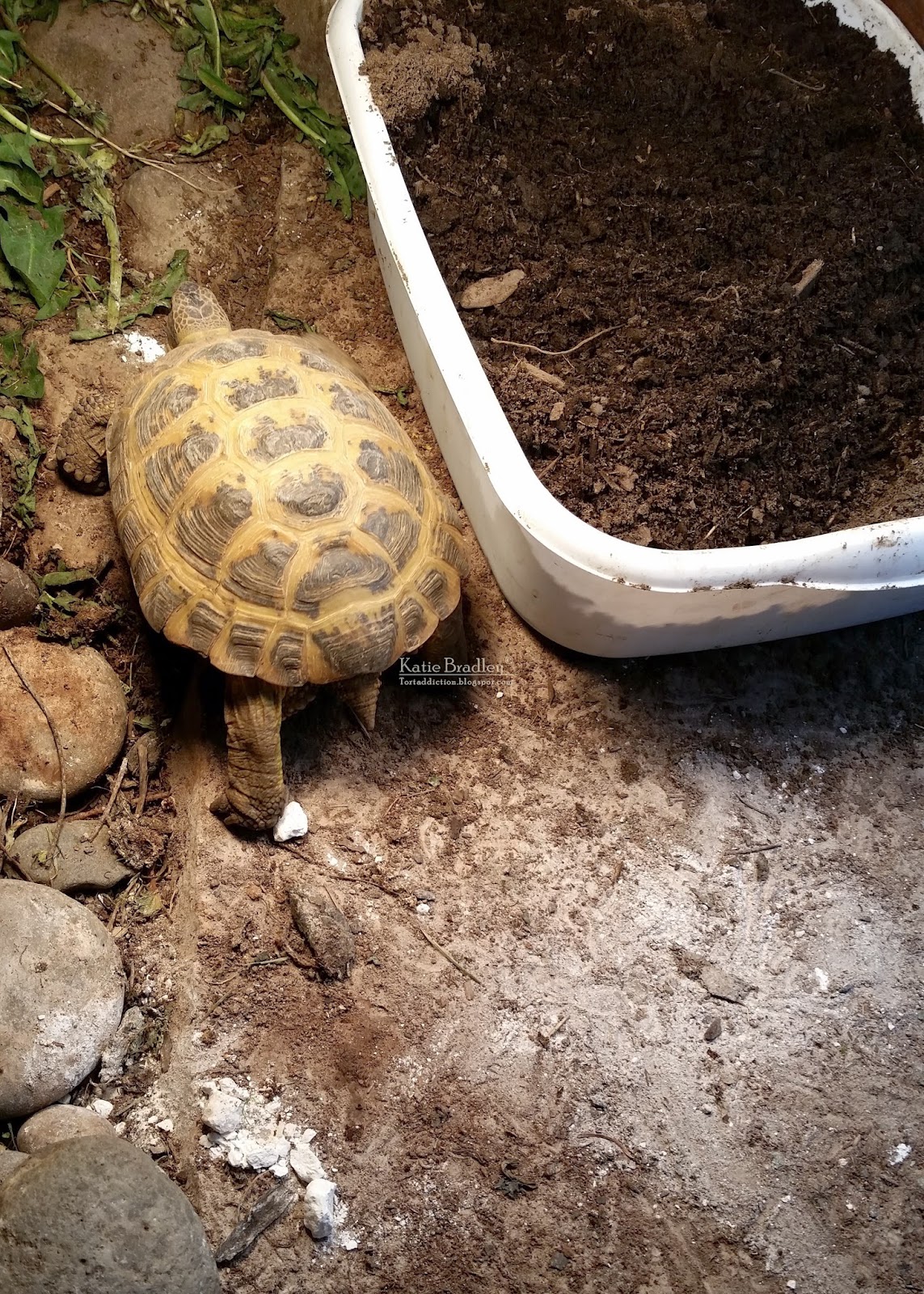 You can see that she completely covered her nest hole in the bin before leaving. 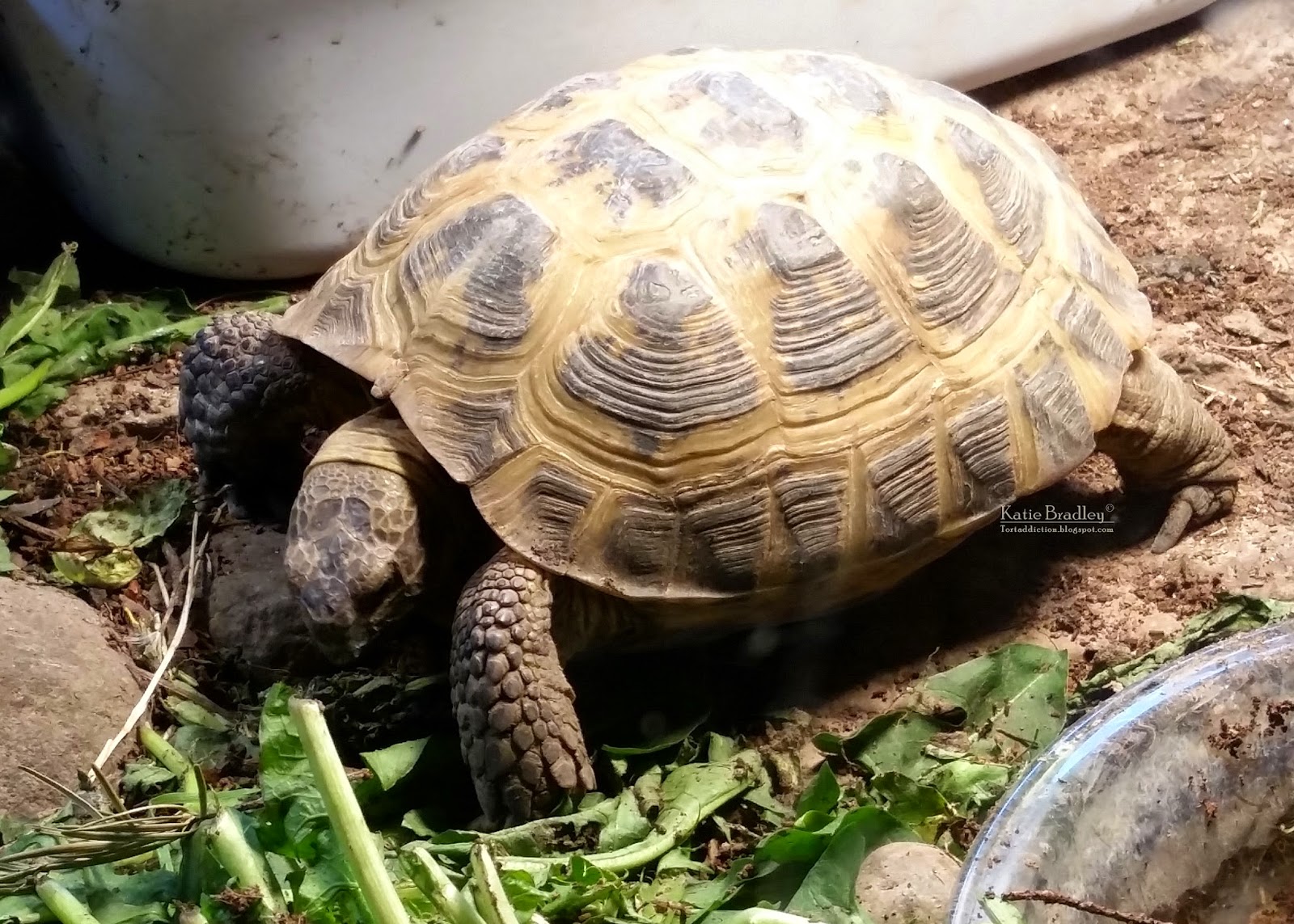 Nothing like a good meal after birthing those eggs!

By the way, it has been 22 days since I woke Timmy girl up from brumation, and she has not been with a male since last year. However, tortoise females can store viable sperm for many years. If these eggs are fertile, they are due to hatch near the end of May. Last year, Timmy laid a second clutch about 3 weeks after the first clutch, so I am curious to see if this happens the same way this year.

I'm giving the girls a break from male contact this year, but I do still expect some viable eggs. Stay tuned for more!

Congrats. Love the photos. Nice to know that they need to finish the whole process. Just wondering though, as I don't think others replace the eggs with stones, do you think that is really needed?

wellington said:
Congrats. Love the photos. Nice to know that they need to finish the whole process. Just wondering though, as I don't think others replace the eggs with stones, do you think that is really needed?
Click to expand...

Good question. It might not be necessary for every tortoise. Last year however when I 'stole' Timmy girl's eggs out of the hole, she started searching everywhere with her foot, and her breathing turned funny. Then I put a stone in, and she happily pushed it into the hole and proceeded to cover up her hole.

Amazing. Thanks for sharing the pics and insight.

biochemnerd808 said:
Good question. It might not be necessary for every tortoise. Last year however when I 'stole' Timmy girl's eggs out of the hole, she started searching everywhere with her foot, and her breathing turned funny. Then I put a stone in, and she happily pushed it into the hole and proceeded to cover up her hole.
Click to expand...

Wow, very interesting. Also very glad you were paying attention. It is pretty cool how she uses her foot to break their fall.
Thanks, will keep the rock idea in mind just incase.

Congrats! I can't wait to see those cute little babies. Thanks for the info. I enjoyed it.

Thanks for sharing. Great photos!

Well done Timmy,It's amazing how those big clumpy legs can be so gentle when touching the eggs

Loved those pics!! Good luck with the eggs!!

Wonderful pics! Wonderful documentation!!!!!
Timmy is SUCH a sweet girl!
Wishing you the best of luck with the eggs!!!!!

Awesome Katie!!
You must log in or register to reply here.